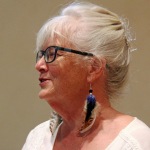 Pamela is an accomplished accompanist and church musician.  Active in several states on the East Coast and also in Japan, she is now living in Santa Fe, where she is accompanying and working with local singers in the Santa Fe area.  She was organist at First Congregational United Church of Christ in Albuquerque, but earlier than that, she had a cherished job as director of music at St. Luke Lutheran Church in Richmond, Virginia, where she also developed the venue for concerts.  She attracted and produced the Alexander Paley Music Festival in the venue.  The Festival is a 22-year old annual festival showcasing Russian virtuoso pianist, Alexander Paley.  She narrated in two performances with him in January 2016 and another two in January of 2017.  During her last eight years in Richmond she performed 126 times in senior homes, a ministry that came to be a favorite.