Pamela grew up on Long Island, 30 miles from New York City, then moved far too many times and had far too many occupations.  A third-generation church organist, she attended Oberlin Conservatory of Music as a piano major but dropped out, earned a B.A. from the University in Colorado in Asian studies, and received a Master of Music in Collaborative Piano from the Longy School of Music in her 40’s.
Her parents were professional musicians; her father was noted archaeomusicologist Ernest McClain.
Seeking a wider experience than just Western classical music, she went to Japan (1973-4 and 1977-1979) where she studied nagauta (the music of the Kabuki theatre) on the shamisen and was invited to join the professional family of her teacher Kineya Katsusaye. 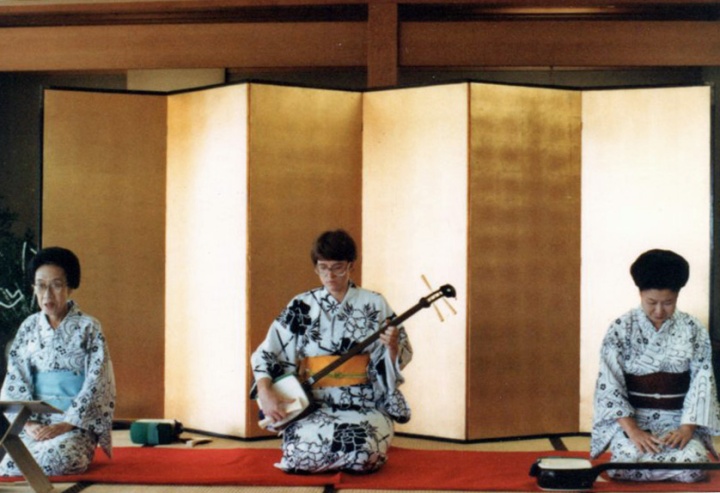 In Vermont (1981-1996) she was the first paralegal in the state, and later loved working in the Middlebury College Library.  She chauffeured and simultaneously interpreted for Japanese artists while Executive Director of The Japan America  Society of Vermont.
She has performed chamber music and art songs extensively; harpsichord continuo with the Boston University Symphony Orchestra; accompanied many types of theater;  performed comic roles on the stage; had fiction published in a Harvard Asian studies magazine; and directed an unrehearsed premiere of Swiss composer Ernst Levy’s opera buffa, “The Martini Stand” (it was a very dry opera).  In Vermont she directed an acclaimed production of Greater Tuna and at the Peabody Museum in Salem exhibited for nine months her annotated collection of Japanese tenugui.
She received the President’s Award from the Addison County (Vermont) United Way for producing a benefit Marathon of the Arts.
In her last eight years in Richmond, she performed 125 times in 26 different senior residences — 17 different programs — most with soprano Carole Wyncoop.

She has been organist in almost every denomination (and a monastery) in New York, Vermont, Massachusetts, Virginia, and now New Mexico, accompanied many, many singers in recital, and occasionally played organ recitals.  Opera is a passion, as is attending the Santa Fe opera. Life is good, with a companion, three dogs and two cats: a total of 24 dirty feet..